Here’s a fun shot from a recent trip to Vancouver for a tech conference the other month. I stumbled across this colourful alley (located in an alley south of West Hastings between Seymore and Granville) while first trying to find my Airbnb accommodations on nearby Pendar Street. I passed by it several times going back and forth to the conference to find for a window of opportunity where there were no pedestrians or vehicles in the shot. And as luck would have it, I got my only opportunity after walking back to my suite from a late dinner. I had no tripod with me at the time, as I would’ve liked to have taken multiple exposures to add even more light, colour and depth into the mix, but I had to work with what I had in that moment, and just took the shot freehand. At that time, I still had no idea why this colourful basketball alleyway was there in the first place until I had some time to google it on the ferry ride back to Victoria. It was then that I learned that this urban park was called Hastings West Alleyway which was part of a 2016 Vancouver city initiative designed to make use of unused public space and giving the city’s inhabitants places to gather and instil a sense of community. The idea was to simply make the alleyways more than just service corridors for vehicles and dumpsters by turning them into “play spaces” as land, especially in Vancouver, comes at a hefty premium these days. Speaking of which, the cost of this social campaign (shared between the City and the Downtown Vancouver Business Improvement Association) ran around $200,000. But judging by its frequent use by everyday city folk and tourists seems to be money well spent in my opinion. And the alleyway has also given people like me a great excuse to try and capture the colourful alley in a unique way from countless other captures. With that, if you’re ever in the area, I highly recommend you check it out through your own eyes! 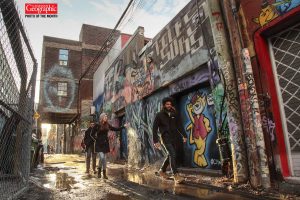 Canadian Geographic’s Photo of the Month!